It's early winter at the beach, one of the best times of the year to live here. No lines at the grocery, no traffic on 30A, still some really nice days at the beach and... the Flounders are thick!

With this being the "slow time" my trips have dropped off from twice a day every day to just a couple a week. I spend most of my time dealing with all the real world stuff like rebuilding boats and tackle, trying to cram in a years worth of put off doctor visits, house chores that get put off, renewing dozens of fishing permits etc.

But I get to fish a little on the Flounder trips! Even it's a just a couple drops teaching folks the finesse tricks of hooking 'em till they get it figured out. On the trips with my all ready trained up locals I get to fish quite a bit. I know it's kinda silly to get so excited about catching fish that weigh a pound or three after chasing bigger fish around (some days MUCH bigger) but I have always liked Flounder fishing and get a lot of satisfaction out of tricking a big pile of 'em or teaching other folks how to.

Flounders are one of my favorite dinner fish, I rate 'em right up there with Triggers, Cobia, Tripletail etc, with a limit of 10 fish per person and holding up well for months when frozen they are great for stocking up the freezer for winter! There are still plenty of other (bigger) fish around but I like to chase those after the box is full of Flounders this time of the year.

Here's a few pics with flat fish for stars. 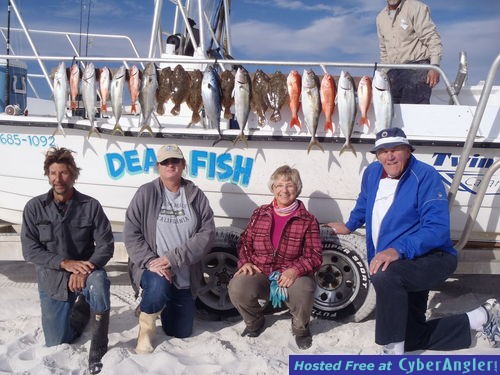 One of my regulars and some of his family. They caught 15 flounders and then wanted some bigger pulls..... nothing pulls harder than a jack!

These folks wanted Flounders but the weather wasn't too cooperative and had us come in early with just a dozen of the tasty critters. 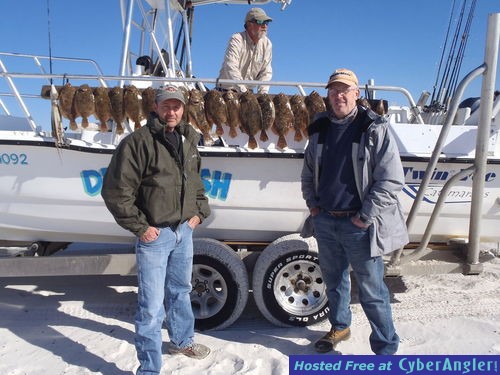 These guys fish every fall with me. They got a limit of Flounders for the freezer and then we went and caught and released some BIG snappers and greater Amberjacks just to wear 'em out. 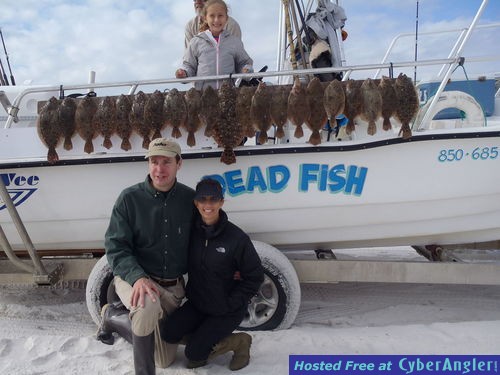 These folks fished with me last winter in January right at the end of flounder season and came back this year just to catch Flounders. They had a limit but check out the size of that one in the middle.... That young angler up in the boat with me not only caught fish all by herself... she has a cast on her left arm up to her wrist! 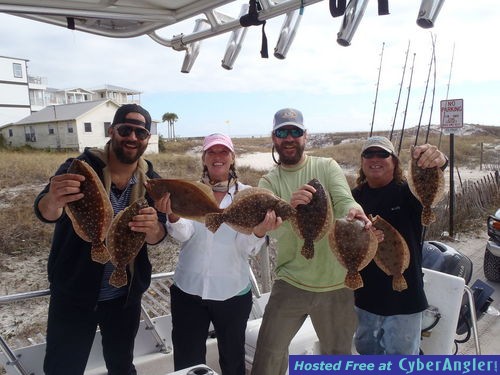 Some of the local Grayton Beach Irregulars on Annie's birthday Flounder trip with part of box full. Not only did they have a party on the boat & get a limit but they let me catch mine too AND they cooked Flounders that night and had Mary and I over for a great birthday party!