Tryin' to Reason with the Season | SoWal.com

Tryin' to Reason with the Season

The last two weeks had us trying to reason with not just hurricane season, but the Feds fishin' season.

Harvey missed Florida completely but still had enough residual surf to keep us from fishing the first two days of our limited 10 day Triggerfish season and two of the last four days of Red Snapper by shutting down the first half of Labor Day weekend.

Irma rolled around the next weekend but no damage anywhere in our part of the world (we did have 3 palm fronds down in the yard). But, once again shut down two of our Triggerfish days. My favorite fish to eat, Triggers have been closed completely for over a year and a half. The State of Florida came up with a limited 10 day season spread over four weekends this Fall and so far we have missed four of the six days they have been open! Oh well, four more days in October and all we can do is hope for calmer weekends on the Gulf.

Fishing has been good when we have been able to go but there have not been a lot of folks here at the beach the past week. While we have not had any impact from the storms other than a little surf if you listen to the Weather Channel they would have had you believe that Florida no longer exists and I think that kept a lot of folks away. Oh well, they gotta sell plywood to keep Home Depot in business I guess.

Plenty of Kings around, we found a wad of a dozen cobia yesterday with one being about 32 pounds that we kept, my son William said they saw a sail this morning free swimming and then jumped another one an hour later, the Vermillions are still plenty thick once you get offshore a few miles and any trash you find floating seems to have Mahi on it...Pretty fishy! 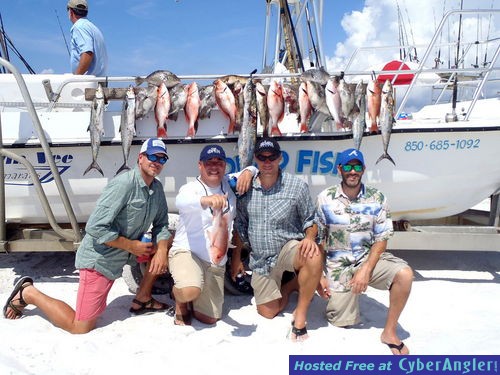 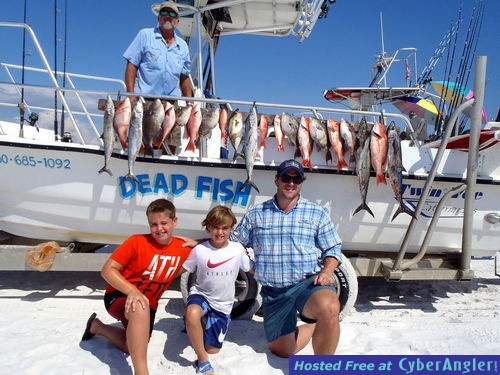 Another Limit of Red Snappers, Triggers and some Kings on a half day. 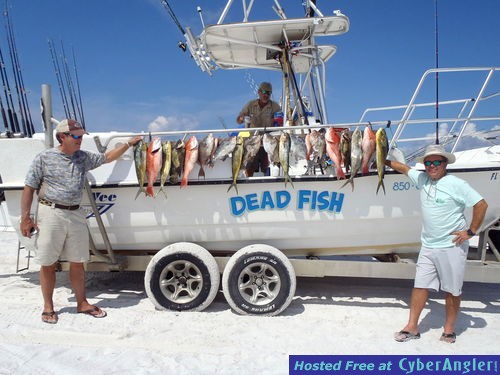 These 2 anglers got a limit of Snapper and Trigger and then found a branch floating that had not only a pile of Mahi but those 2 Tripletails hanging on the board as well. 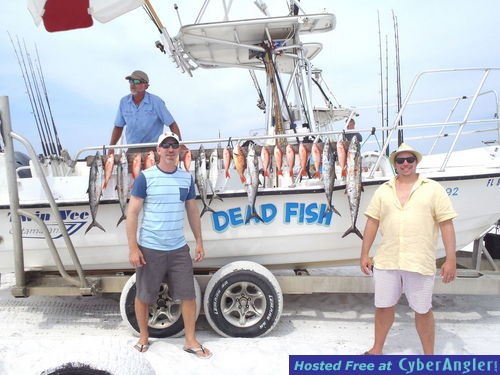 Red Snapper closed? No problem for this crew with a pile of Kings and Vermillions.

Some of the regulars on a very quick and close in run to put some Triggers in the box..... I even got to eat one! 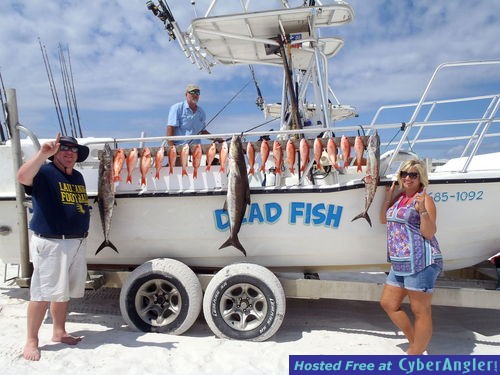 This was the first time beach launching for these 2 anglers. I had 'em when we put that cobia in the boat on the first stop, they were real impressed with being able to catch a limit of Vermillions after but when the last stop on the 4 hr trip had 3 nice Kings bite right away they were ready to come back as soon as the freezer could get emptied.

The weather forecast looks fantastic for the foreseeable future.... get out there and catch something! September is usually one of the nicest months of the year here at the beach with clear, warm calm water, mild daytime temps and no crowds!