We are excited to announce our first public sea turtle release in over a year! Join us on Tuesday, June 22nd, at Henderson Beach State Park to wish Sheldon, Wedgie, Clippers, Blackfin, and Bubbles on a safe journey back into the Gulf of Mexico. The release will begin promptly at 8:00am, plan your commute accordingly as these releases typically go pretty quickly once we get started. We are humbled to be able to share our sea turtle releases with the community again!

Please note that we are keeping an eye on the weather in the Gulf of Mexico and will plan accordingly if needed.

Gulfarium Marine Adventure Park has been active in marine animal rescue and rehabilitation for many years. The C.A.R.E. Center was developed in 2015 as a non-profit to facilitate and further our continued coastal conservation efforts. The program has helped to rehabilitate and release various species of sea turtles found in the Gulf Coast, from the Loggerhead, Green, Kemp’s ridley, to the Leatherback. Over the years hundreds of sea turtles have been rehabilitated and released back into the wild by the Gulfarium.

THE GULFARIUM C.A.R.E. CENTER ACTS AS A BEACON FOR COASTAL CONSERVATION THROUGH MARINE ANIMAL RESCUE AND REHABILITATION, ENCOURAGING AWARENESS WITH PUBLIC EDUCATION AND OPPORTUNITIES FOR ACTIVE PARTICIPATION.​ 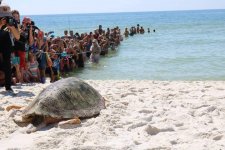 Due to forecasted inclement weather, tomorrow's release has been RESCHEDULED to Thursday, June 24, 2021 at 8:00am at Henderson Beach State Park. We apologize for the inconvenience and hope to see you on Thursday!
Toggle signature
Connect with SoWal !