Anyone else dance on a table at midnight?

I'm not sure...
Toggle signature
My mind tends to wander... but fortunately, it's so weak, it doesn't get very far...

When you start day 1 of clean up and uncover this in the rubble. Who needs a phoenix when your angels are watching

A wonderful story by Bruce Collier at Beachcomber Destin ..

In the early hours of the morning of February 13, a fire destroyed The Red Bar in Grayton Beach. The event made national news.

The Red Bar was here when I moved to this area, in the latter part of the ‘90s. It reportedly opened 24 years ago (on Super Bowl Sunday), so it hadn’t been open that long when I got here. Still, the first time I went there (for lunch), it already had the look of a permanent institution.

It might have been the decor. Pretty much every square inch inside was painted, postered, embellished or hung with a near-indescribable collection of classic and pop art. There were posters of sports (especially soccer), movies (foreign films, or American films with foreign titles) concerts (from jazz to opera) and photos of the famous, the infamous, and the just plain unidentified. In between were album covers, framed artwork, frameless local artwork, carvings, and just interesting stuff. Like the Louvre, it could not be appreciated fully in one or two visits. You had to see it, study it. I hope you did, because that stuff is gone.

The good part…no, the good parts are many. Most important, no one died, or was injured. Also intact are the memories of great meals, terrific music, and houses packed like subway cars. The Grayton Beach neighborhood’s limited parking brought out the stalking skills and territoriality of an African lioness in otherwise docile tourists.

I used to know the menu by heart, and I’ve tried everything they make. My favorites are the panne chicken, blackened grouper with bacon cheddar grit cake, grilled fish sandwich, and those incomparable weekend-only crab cakes with citrus beurre blanc.

Then there’s the apple dumpling, and—occasionally—the chocolate creme brûlée. The latter always made me feel like I was on some insiders list.

It’s a testament to the management’s self-confidence that the crab cake recipe was made public years ago. Sure, now you could make the crab cakes at home, and not just on Friday and Saturday. But you’d miss Olivier, with his leading man looks and Continental manner with customers. And his brother Philippe, soccer fan (and player) discussing Highlander: The Series, at least with a fellow enthusiast like me.

And your server bringing out the blackboard menu, which she’d either prop on an empty chair, or, in the absence of any empty chairs, just stand there and hold while you made up your mind. It never took long, at least for the locals. After all, you could always come back tomorrow for what you almost got tonight.

Lunch there was a great place to talk business, or just sit around and watch others talk business while you drank beer, ate hamburgers, and studied the walls. God knows how much South Walton property was bought and sold at Red Bar; at least the lunches were sensibly priced.

And the music. Brunch with music there was likened to a religious experience (Church of Bloody Mary?). When Dread Clampitt was playing, even beach mice couldn’t squeeze in. The place was consistently voted Best Bar for Music on any number of area polls.

That said, this isn’t meant to be a eulogy. That’s for the dead and gone, not the temporarily absent. I can’t count all the restaurants, bars and dining establishments that have come, dazzled, fizzled and vanished without a trace in this area. There are buildings that have housed as many as six brilliant-on-paper ideas for dining, all of which crashed and burned. Other buildings were simply torn down to be replaced by unattainable housing. The Red Bar building itself housed several previous businesses.

So this is not Farewell, Red Bar. It’s more a bientôt(“see you soon”) because within days of the loss, Oli Petit went on the record, saying: “I want to tell our patrons and my staff that we will be back, and we will rebuild to the exact previous specifications—maybe with a better bathroom. Life goes on.”

Do we really want a better bathroom? I mean, wasn’t queuing up to use the potty—placed strategically within a few paces of the bar—an essential part of the Red Bar experience? How many friendships were begun, how many business deals were refined, how many SoWal dynasties were founded, outside the door of the Red Bar loo? Just saying.

As for the rebuild—Amen, Make it So.
Toggle signature
Connect with SoWal ! 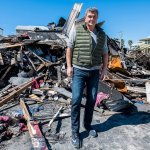