The 10th Annual 30A St Patrick’s Parade and Festival returns to South Walton on Saturday, March 18! The parade along Scenic 30A will join the day's celebration at Gulf Place where everyone's Irish for a day! Celtic rock bands, Irish dancing, food and drink, and activities for the whole family including the pups. Headliner: Whiskey of the Damned! Tickets are available now and sign up if you want to roll in the St. Patrick's Day Parade.

St Patrick's official day might be the 17 this year but our St Patrick's celebration is taking place on March 18.

Described as a “Mini Savannah” the largest St Patrick’s celebration in Northwest Florida kicks off with the parade at 2pm followed by the festival at 3pm at Gulf Place in Santa Rosa Beach. The presenting sponsor is ResortQuest by Wyndham Vacation Rentals.  The festival will have a special tour visit by Dublin born lead singer Eoin McCarthy and Whiskey of the Damned Celtic rock band. Already likened to “The Pogues” this band is sure to rock Gulf Place with their raucus range of Irish music.

Ticket prices begin at – $10 for adults, kids are $5 each and VIP $22.50 each, kids under 4 are free. Available now at www.30aparade.com Sponsor and vendor spaces also available on the website.

The parade anticipates a record number of floats and parade entries, in all shapes and sizes. The parade begins on Florida Scenic Highway 30a and heads 4 miles west, ending at Gulf Place, where the festivities continue.

“When the parade first began, it was a small group of cars and a couple of flags,” said Paul Vizard, event founder. “Now the festival event and stream of floats and decorations are fantastic, I am very grateful for the support of our sponsors and the community.”

The Best in Parade perpetual trophy is up for grabs for the best decorated cars trucks or floats. Festival goers can purchase commemorative T shirts, experience arts and crafts, kids activities, face painting, and of course a variety of food and drinks. A few sponsor spots, vendor table and tent spaces are still available, and businesses are encouraged to be a sponsor, details at www.stpatricks30a.com. Whiskey of the Damned is a five piece, Celtic influenced rock group put together by Ireland native Eoin McCarthy. Located in Milwaukee WI, Whiskey of the Damned are a  group of talented musicians dedicated to playing high energy, raucous concerts filled with an unmistakable mixture of American and Irish rock. Described as a mix of The Pogues, Dropkick Murphy’s, and Flogging Molly, you do not want to miss this act perform live.

The genre known as Celtic rock, which combines elements of traditional Irish folk with punk rock rhythms, has been spreading in popularity among the younger generations in Ireland and abroad for nearly three decades.

The 30A St Patrick's Day Festival is a celebration where everyone is Irish for a day.. The festival is filled with activities throughout the afternoon and into the evening. Adventures for everyone of all ages. Proceeds from the event to help United for a Good Cause, the Spirit of Service, Giving and Unity among the youth in our Emerald Coast community. 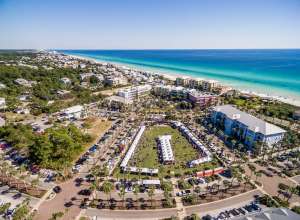