Boy, this winter has gone by fast. Hard to believe that the Spring Break crowds ( hordes?) will be here in two weeks.

The early breakers will have a lot warmer Gulf than usual to play in this year. The water temp on the beach was 66 degrees this past week with surface temps of 67 off a couple miles. I have not heard of a Cobia being seen yet but there are Spanish in St Andrews bay all ready and the pompano bite has been strong on SoWal beaches the past week.

My anglers and I have been steady targeting the Jacks and Vermilions to fill the fish box on the pretty days. I still have not found a hot bite of "legal" greater Amberjacks but with a 34" fork length limit most of my anglers are beat down after landing 2 or 3 "short" 32" fish! We have still been able to limit out on the Amberines most days and those pull hard enough to make most folks need a break after catching a couple.

One of the biggest problems with landing a big Amberjack are the sharks. There are so many big Bulls around every spot with a school of AJ's on it the sharks will eventually attack anything you have to fight for along time. It's hard to slam dunk a 50 pound AJ in the box in just a few minutes!

The weather has been warm but it is still February and the wind comes with the fronts. I was supposed to run a group of locals out today to chase big Jacks. The beach is slick calm and beautiful but the wind is 15 to 20 out of the NE and it would not be any fun 10 to 15 miles offshore. I'll be glad when the Cobia and Kings show and we have big fish right up on the beach again. Come on 70 degree water! 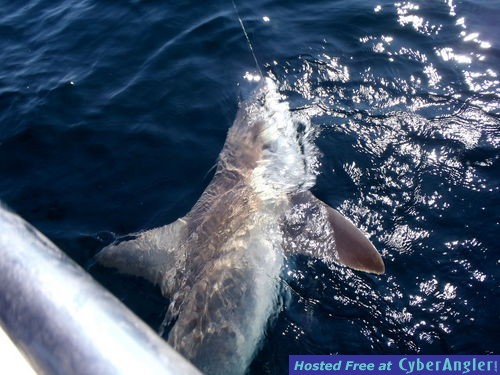 A magic trick, that 40 pound AJ turned into a bull shark!

Local troubadour "Huck" of Huck & Lilly fame with his first ever AJ. After he caught his breath he said "you guys were right, that pulled harder than a volkswagen!"

More locals with a great board on a beautiful winter day. Can you tell which angler landed the keeper AJ? 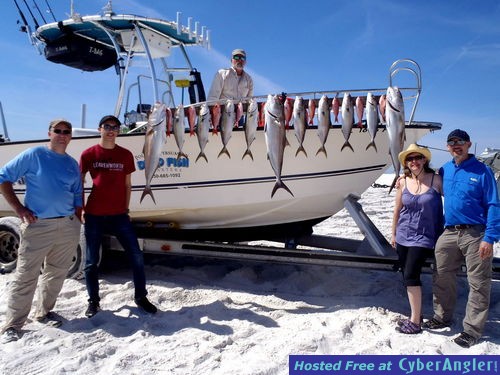 These guys landed three greaters over the magic limit, and a bunch more just short. Their arms gave out so we quit fishing.....the box was full though. 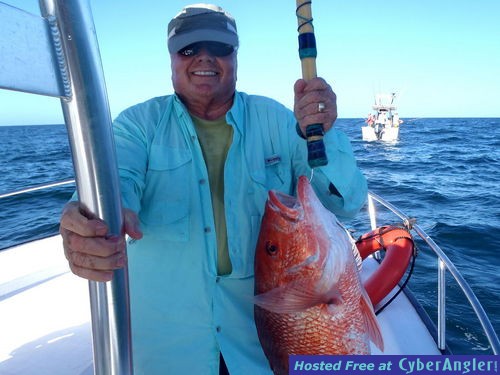 Yes Virginia, there are still plenty of Red Snappers out there. I asked this winter visitor when was the last time he caught a snapper that big. "Never" he said.... and he wasn't even mad at me when I threw her back and we watched her swim back down! 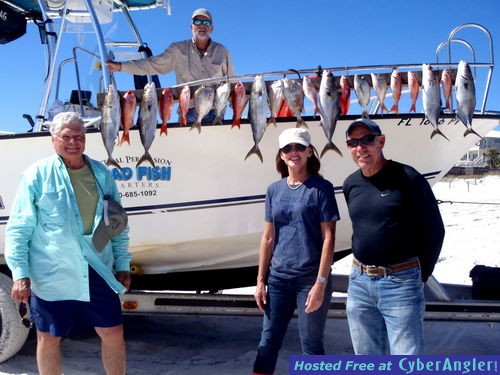 Even on the "slower" days the board and box are full and the anglers are tired and happy....we are truly fortunate to have such a great fishery right off the beach here.

Weather forecast looks bumpy for the next several days. I may have to put the bay boat in the water and see what we can scare up in the brackish water.