Inside the Studio with Justin Gaffrey Chapter Two | SoWal.com

Inside the Studio with Justin Gaffrey Chapter Two

Justin Gaffrey is a sensitive, insightful, creative and successful SoWal artist. He also kills yellow flies with a blowtorch.

He burns them to crisps, their burnt bits blending with colorful layers of dried acrylics texturizing the floor. He sent one to oblivion right in front of me after the little bastard made the final mistake of biting me. Sweet revenge in the studio! 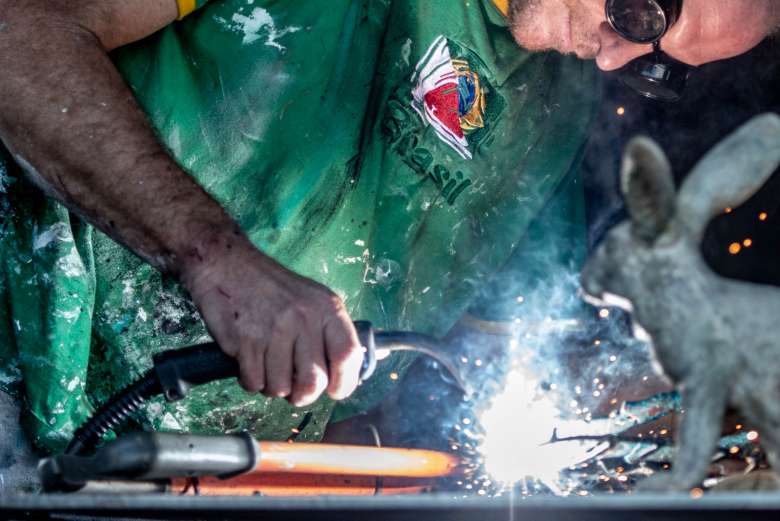 Just the week before, I chaperoned my son’s class trip to the Justin Gaffrey Gallery in Blue Mountain Beach for Justin’s Explore Creativity event for Art Week South Walton. He welcomed both adults and kids to the gallery, long tables set up in the grass outside under the pines and Cyprus trees overlooking the pond out back. Pizza, beer, cold water and Flaming Hot Cheetos for the taking. But the real draw was painting a seascape with Justin. Sort of like those paint with wine classes, only a master artist comes around and asks if you need help with technique. If you’re smart you’ll say yes, and at least one of your waves or maybe your sun will be by Justin. We are now the proud owners of an Oren/Justin collab. 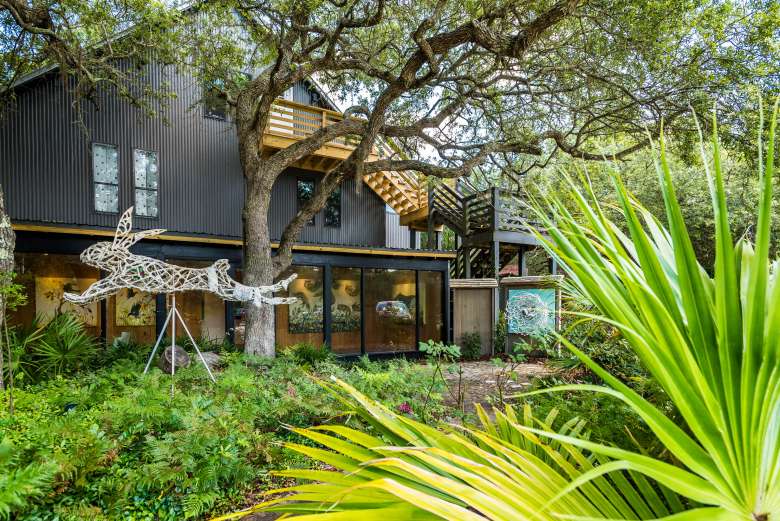 Justin’s backyard has served well as a space where inspiration can be found. It’s a place where the artist often encounters his spirit animals.

“When you see the deer and the rabbit and the bee it’s some aspect of myself,” says Justin.

Justin’s piece for the Underwater Museum of Art in Grayton Beach – a collaboration between the Cultural Arts Alliance and the South Walton Artificial Reef Association - is a self-portrait depicting the deer, the rabbit, and the bee.

“It morphed into a weird mythological looking creature,” he jokes.

The Underwater Museum of Art (UMA) is the first of its kind in the US.

“I’m so excited this is happening in our area. I’ve been a water person my whole life. I still imagine myself scuba diving under there. When I used to scuba dive I loved anything I could go under and through.” 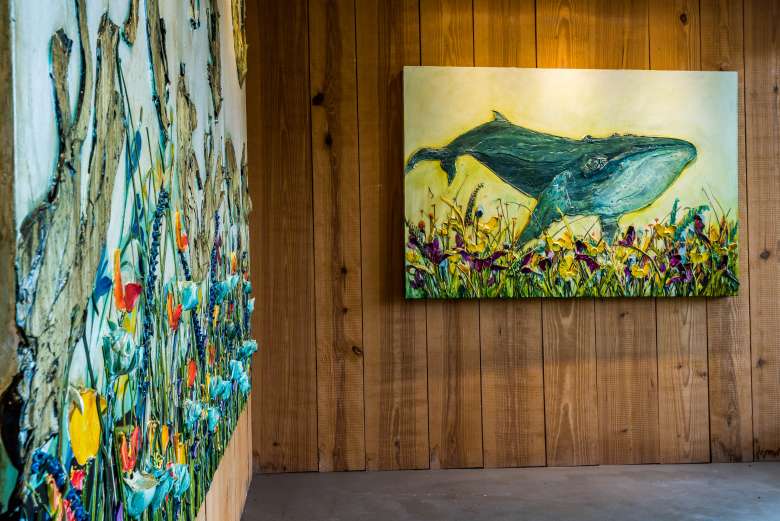 Justin’s love for nature extends beyond the reef to climbing mountains. Being on his boat. Being in the forests. Being on the rivers. Being in the desert. Being away from people. It’s in these moments – when he’s in the middle of nowhere – that he feels connected to things.

Back in April, Justin took a trip to Colorado with his daughter. He came back and jumped into making pieces for what would become a series titled Equation - only he was supposed to be making pieces for his Suspension of Disbelief exhibition. Now the two are sort of intertwined as a cohesive step-family.

In literature and movies, suspension of disbelief allows the audience to accept events or characters that would ordinarily seem far-fetched.

“I felt like in the present moment people were doing that in real life. Just suspending what’s real and that’s what this whole series of work, the Suspension of Disbelief came out of,” says Justin. 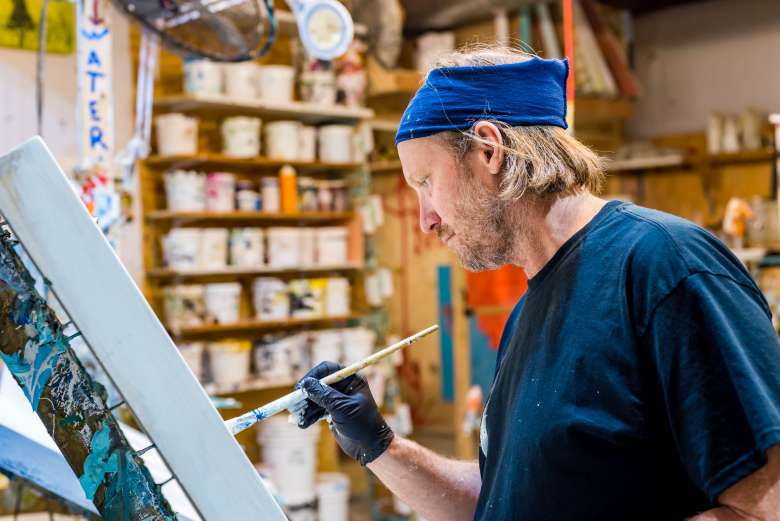 After many years of raising his family and building his career, Justin admits he didn’t have much time to follow politics. It wasn’t until his daughter started college that he became woke. With the pain of racism and misogyny and the absurdity of the political environment coming to a head last year, Justin began identifying not necessarily with what he was seeing politically, but with what he was feeling emotionally. For instance, pieces depicting women are dealing with the Me Too movement.

“To deal with intimacy is a beautiful thing even when it’s inspired by the suspension of disbelief,” says Justin.

Justin began his series Equation in a stream of conscience way, but during that process (without intention) vision and meaning emerged.

“I realized how much freedom there is in that,” he says.  Somewhere in the middle it became obsessive. And it all dealt with simple machines, physics and mechanics on a primitive level.

As Justin began studying and conceptualizing, that’s where the manic behavior came in. 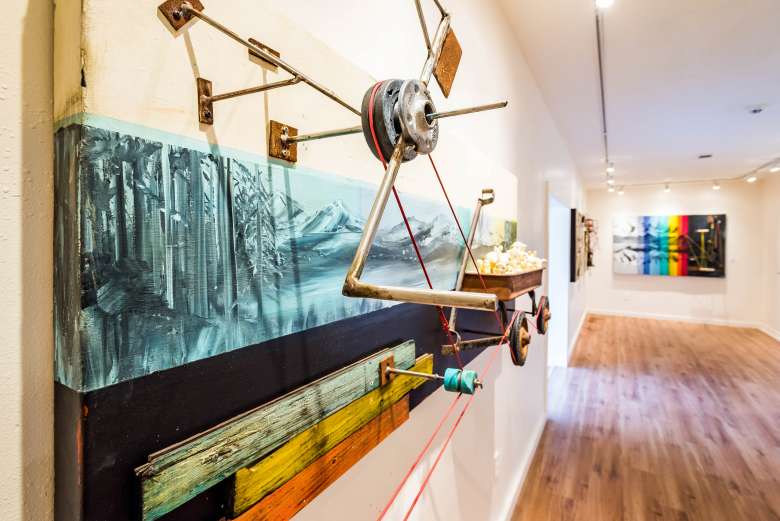 “All the moving parts and shapes and ideas would get in my head and I would go to bed at night and I couldn’t sleep,” he explained. When he would finally fall asleep, he would dream he was doing a process, only one that’s constantly repetitive and doesn’t go anywhere. “For me, I feel like it ends when it should because I’m emotionally and physically exhausted and need to rest anyway,” he says.

Which reminds me of the first time I visited Justin’s gallery. It wasn’t the seascapes or the sculpted flowers that I connected with. It was a crumpled yellow Post It stuck to a picture of Vincent van Gogh in a back office that read, “Ha, ha! A life without anguish is life without art.”

Bring on the yellow flies! 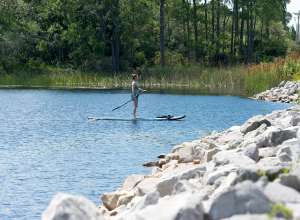 Inside the Studio with Justin Gaffrey Chapter One