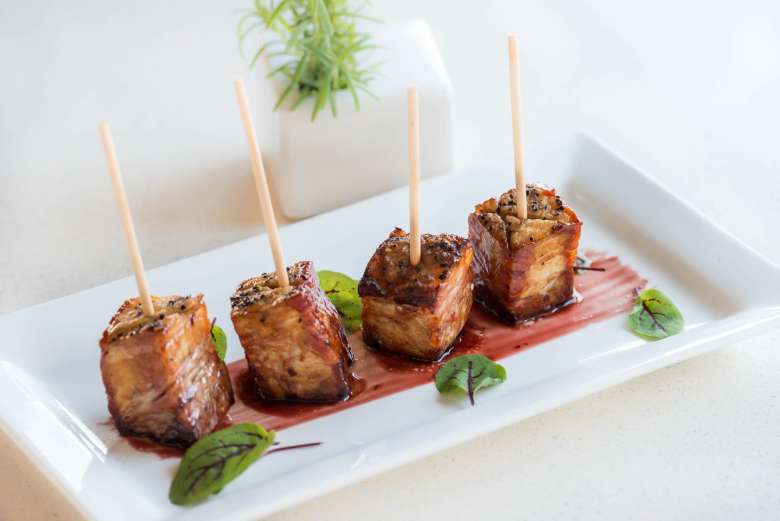 George’s Pork Belly Lollipops just earned the top spot on my final meal list. Given our obsession with food, it should come as no surprise that we quickly accepted an invitation to George’s at Alys Beach to meet Chef Darek Tidwell for a menu tasting.

Plate after plate of Chef Darek’s transformative cuisine blurred the line between George's theme of Behave or Misbehave. And the ensuing conversation with owner Ann Hartley and Chef Darek became one of the most memorable meals of my life. 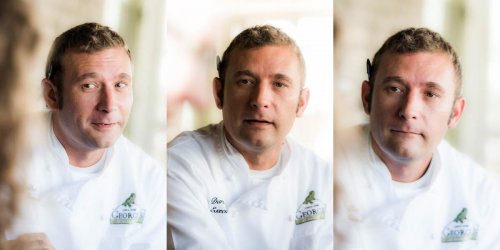 Chef Darek is pushing the creative envelope with flavors inspired by life’s special moments, from iconic coffee and beignets in New Orleans to his work with his Michelin-Starred mentor Jose Sanchez, who he assisted in testing recipes that would appear in Sanchez’s book on molecular gastronomy. Chef Darek reveals that the concept behind molecular gastronomy was originally intended as an art installation, and not so much for feeding hungry people in a restaurant.

“I think that there’s a novelty to it. It’s a little more esoteric and it’s more in your head. It’s less about eating and more about artistry,” Chef Darek said. Still, he has managed to marry the two concepts, creating food that is satisfying to the palate and the belly, with elements of surprise that stimulate all five senses. 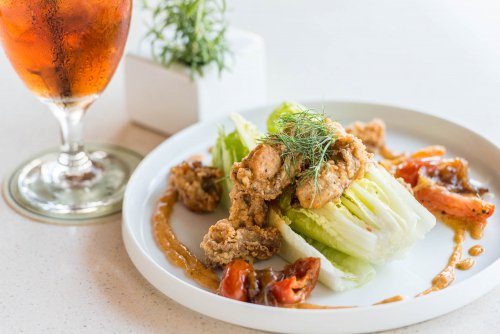 Chef Darek and staff started us off with the Fried Oyster BLT Salad with farm stand romaine, bacon confit and tomato vinaigrette, and the Crawdad Cronuts with white truffle honey topped with salmon roe - inspired by Chef Darek’s trip to one of our favorite New Orleans indulgences - Café Du Monde. 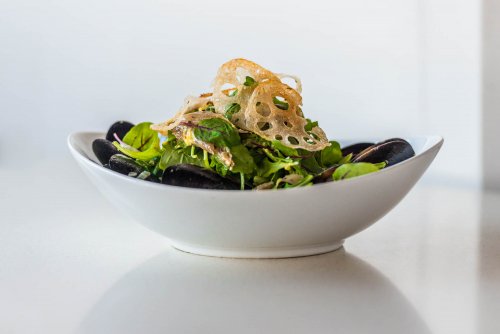 Then we tried the Wood Grilled Chicken Panzanella Salad with arugula, roasted tomatoes, grits croutons (for real) and lemon saffron vinaigrette, and a variation with Mussels topped with crispy and beautiful lotus root chips. 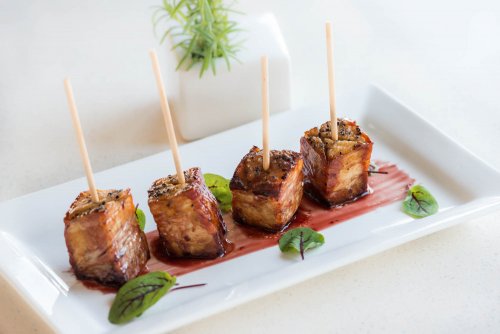 The Pork Belly Lollipops with melty fat and fork tender meat gave my insides a hug and I promised to love them forever. 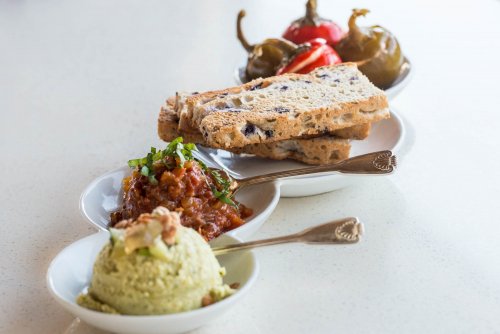 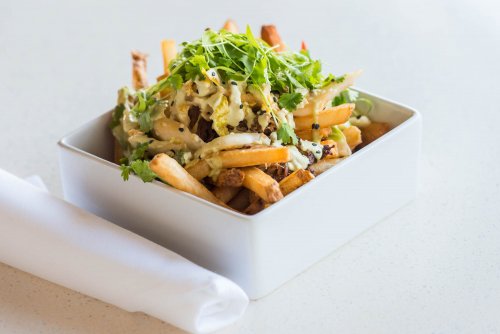 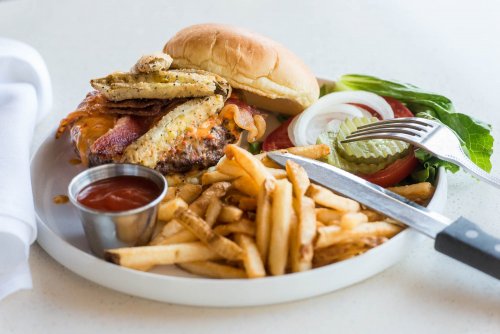 George’s Famous Fries topped with pulled pork, Asian pear relish and wasabi ginger sesame drizzle came in a white bowl that I never saw the bottom of. In an unlikely twist, the Alys Burger showed its Southern roots with collard green and blue pimento cheese, fried pickled okra, and bacon. 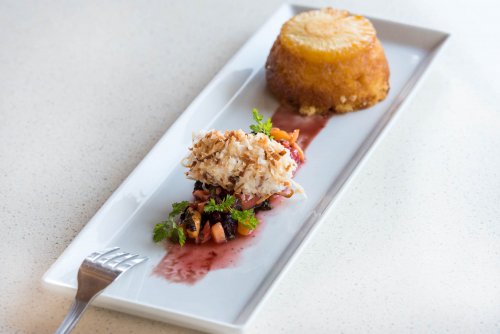 And for dessert, Chef Darek sent out Smoked Pineapple Cornbread Cake with coconut gelato and berry salsa, a recipe he once served to Vice President Joe Biden.

Chef Darek lends his menu-making skills to a new offering at George’s that’s right on trend, Table for Two Tuesdays. What sets George’s apart is that Chef Darek develops a new menu every week based on what’s fresh from the farm.

Now through March, George’s will offer a unique date night menu every Tuesday that includes a shared appetizer, a salad and entrée per person, dessert and a bottle of red or white wine hand selected by Sommelier Jake Purvis. Creating a four-course meal every week provides a good testing ground for new recipes and a creative release for the culinary-trained kitchen staff that includes three women. 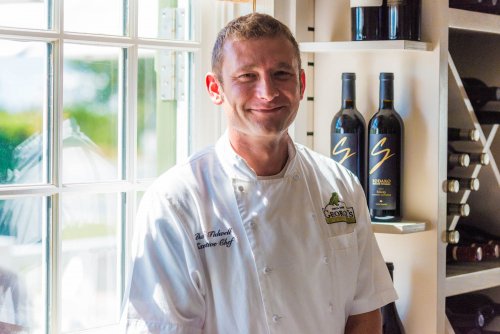 “It gives me an opportunity to utilize and take better advantage of the season,” said Chef Darek.

George’s will also host a Wine and Swine Dinner highlighting pork in all its forms with a collaborative menu among the kitchen staff that is consistent with the way Chef Darek operates on the reg. All artistry aside, Chef Darek maintains, “I’m very product oriented. There’s not a lot you have to do to it if the product’s really good.”

Owner Ann Hartley, a creative soul in her own right, has a remarkable ability to attract other creatives, and it’s evident in the popularity of the Hartley Group Restaurants (Seagrove Village Market Cafe and La Cocina Mexican Grill & Bar) she runs with her husband George.

George’s at Alys Beach is situated on Scenic Highway 30A in a charming cottage with an Old Florida feel. Stop by Monday-Saturday for lunch from 11-3 or dinner from 5-9. Visit George’s on the web at www.georgesatalysbeach.com. Join the conversation and stay up to date on Table for Two Tuesday menus on Facebook. 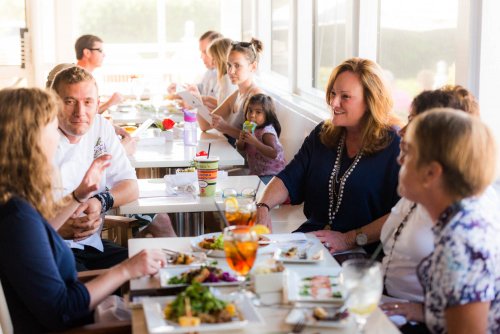 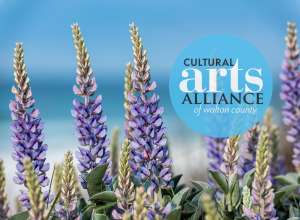 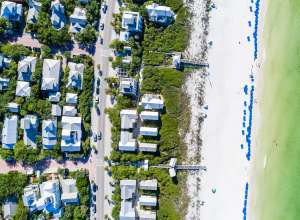