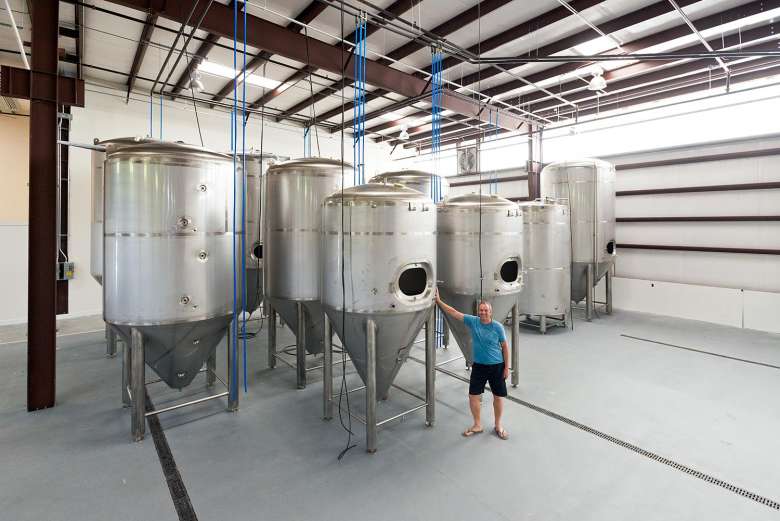 Martin Liptrot heads up marketing for Grayton Beer Company and he's a busy man these days. He's in charge of launching the company's new product line, transitioning the brand from a local novelty beverage to a major player in the region. Things are heating up at the brand new production facility in South Walton.

After nearly a year of construction, state-of-the-art brewing equipment is arriving every day. Martin took a bit of time out from his hectic schedule to give us a tour. We followed with camera clicking as he bounced around the giant warehouse, painting a vivid picture of what is coming. "Our largest fermentation  tanks will hold as much as 22,000 pints of beer each, and with our nine tanks we'll have the ability to brew the equivalent of 150,000 bottles of beer at a time," Martin beams. "We're about to install our high-tech bottling machine from Germany and receive shipment of all of our new labels and packaging. We'll have 10,000 square feet of cold storage."

In addition to the 18 foot-high fermentation tanks, additional vessels are arriving to store and manage the hot and cold water needed to produce high quality beer as well as a grist case to hold the grain to be added during the brewing process. Grayton Beer is preparing to launch five new beers in coming weeks, available in bottle and draft in restaurants and bars from Pensacola to Apalachicola. Perhaps even busier than Martin, is Head Brewer Brad “Shank” Shankweiler. He's the man in charge of creating a line of great tasting beers that will hold up under the scrutiny of the most discerning beer lovers and critics in the world.

"Damn Straight," says Shank. "We aim to compete with the best beers in the world, using the finest ingredients, methods, and quality control available in the industry today."

Today marks the passing of a dear friend, Grayton IPA. This classic India Pale Ale had been a contract player on Grayton Beer's list from the early days. But, like the unknown actor in the opening scene of the blockbuster movie or the redshirted engineer teleported to distant planets in the TV series Star Trek, it was always destined to be the first fatality.

The IPA developed a loyal and passionate fan base during its career but was increasingly marginalized among the newer, more contemporary, more versatile ales joining the Grayton Beer line up. In its final performances the IPA was only seen alone at the back of the shelf, or clustered with his friends in a six pack, hidden from the glare of the refrigerator lights, his name slipping from the credits.

Other beers who remember his early performances are grateful for the pioneering work he did, breaking through the pint glass ceiling that prevented so many craft beers being accepted into bars and restaurants simply because of their style and taste. Fans wanting to pay homage to the IPA can still find him available in stores and bars for a week or two, but then he will be gone. Sold out, but fondly remembered. RIP IPA. Awaiting the new sign outside the South Walton production facility Loading docks for shipping out to the thirty masses. 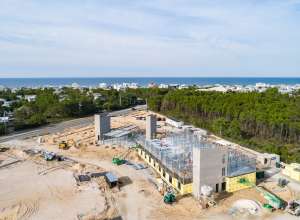 The Lodge 30A Construction Updates & Information