Executive Chef Erik Kellison has been working in the restaurant business since the age of 14 and honed his skills along the way to eventually become the sous chef at George’s in Alys Beach.

Loving life at George's led to coming in early to treat the staff to a handmade, loving breakfast. The varied and delicious breakfast time quickly caught the attention of George’s owner Christy Spell Terry. 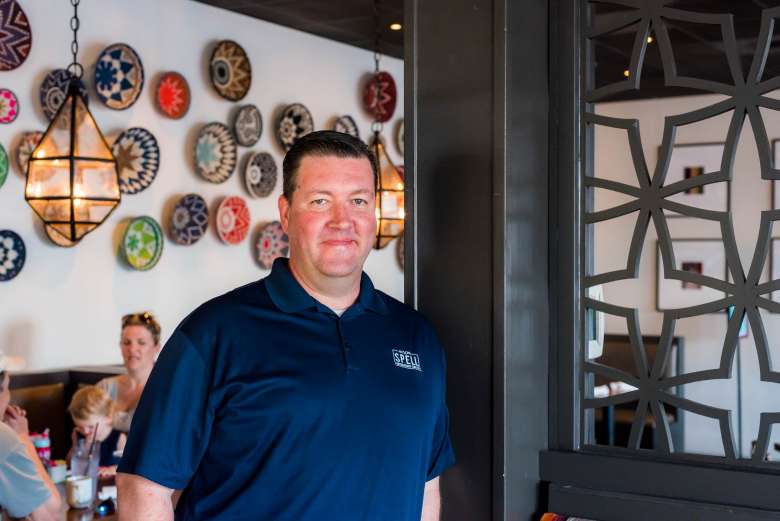 “My Dad and I were knocking around names for our new place and with our Memphis roots (Brookhaven Pub & Grill), we were always fascinated with the Memphis Grizzlies (the city’s pro basketball team) and their “Grit and Grind” style of play…we thought this would be a perfect handle for our SoWal breakfast place,” explains Christy. The Grizzly bear is featured prominently on all Grits and Grind logos.

Erik’s breakfast-cooking skills propelled him to his current Grits and Grind Executive Chef status and he came up with a menu that is sure to please folks regardless of their geographic origins. At Grits and Grind, you can count on every pot of coffee being freshly ground with high-altitude organic Tuscan Hills coffee beans and every glass of OJ being freshly-squeezed.

“Visitors to our beaches are all about having ‘fun in the sun’ and adults really appreciate my The Next Morning Benedict,” laughs Erik. 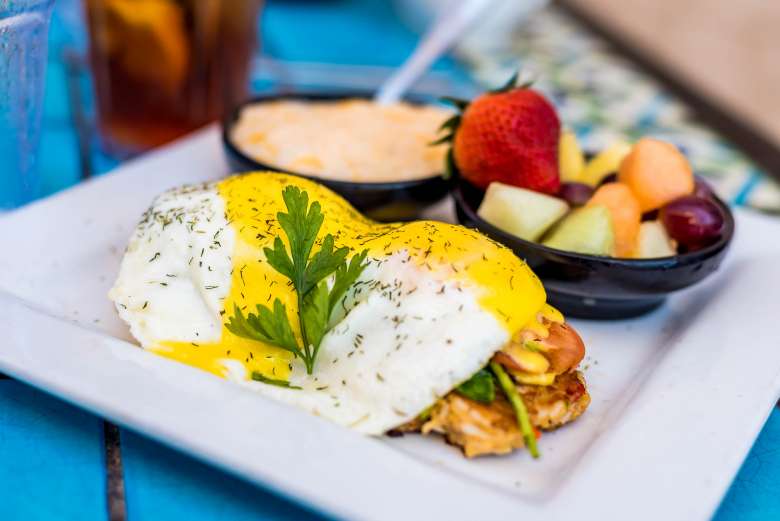 With two eggs cooked over medium on a biscuit with ham, topped with chopped sausage, tomatoes and green onions topped with gravy and hollandaise sauce, this offering is sure to get you right for another day on the beach! Morning Spirits at Grits include the Grit & Grind Bloody Mary, Phillips Head Screwdriver and a very tempting Mimosa with champagne mixed with fresh pineapple or orange juice. Other Southern Style Eggs Benedicts include a Smoked Salmon Benedict, a Crabby Benedict, and a traditional The Grind Benedict (made simply with eggs, biscuit, ham and hollandaise sauce). 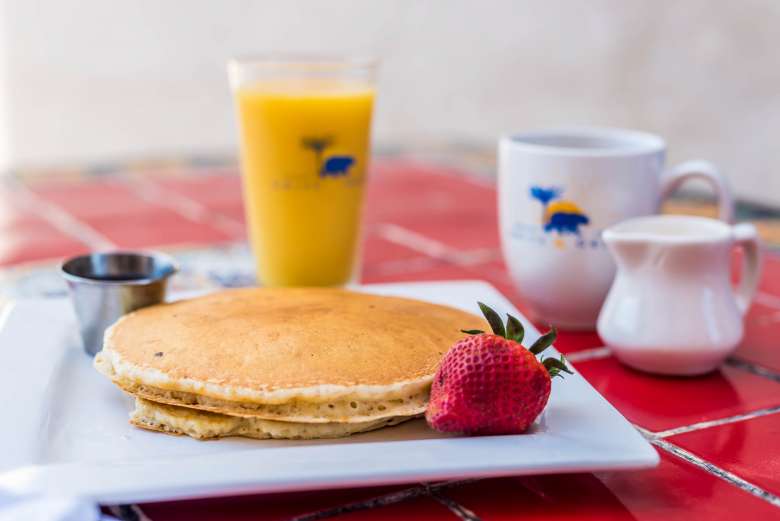 Erik has recently made a few changes to his menu and these items should be a big hit with the breakfast crowd. They include a Smoked Salmon BLT with multi grain bagel, smoked salmon, crisp bacon, spinach, tomato, and caramelized onion cream cheese served with fresh fruit. Another creation of note is Shrimp & Grits Moque Choux  with shrimp, cheese grits, fried egg, and andouille Cajun sauce. Always a favorite is the Banana Bread French Toast served with maple syrup. Sure to please is Crabby Benedict featuring two all-lump crab cakes, sliced tomato, fresh spinach, two eggs and hollandaise sauce.

“I am also switching over from traditional omelets to Three Egg Scrambles so you get a little bit more food out of it,” says Erik.

Four Scrambles are offered and include a Hungry Grizzly with everything but the bear included and the lighter Veggie Scramble for those so inclined. 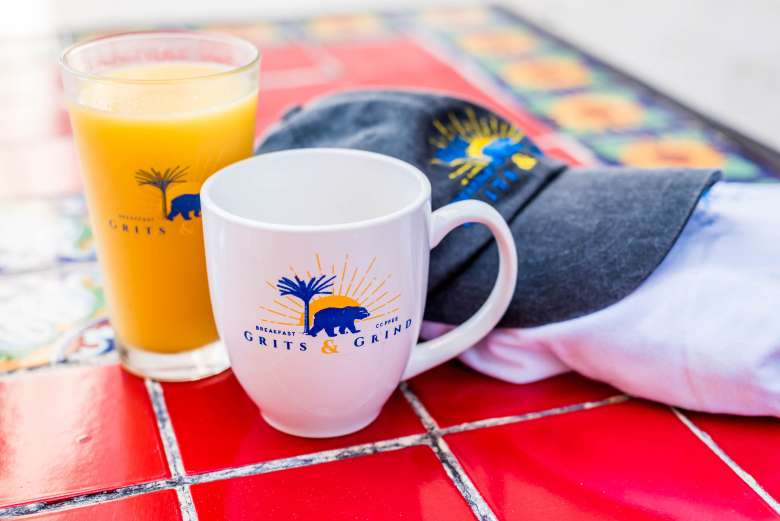 It is no surprise that Grits and Grind offers several South of the Border items…with both the La Cocina Mexican Grill and Bar and Grits and Grind sharing the same kitchen, the transition from Southern breakfast food to Tex-Mex lunch and dinner is a smooth one. Huevos Rancheros, Chorizo Sausage Breakfast Burrito, and Sombrero Omelets are popular items in this mix.

Every chef has his favorite menu item, and for Chef Erik, it is his Braised Pork Belly Hash!

“This meal has become one of the most-often ordered items… I love this meal and was a little worried how it would be received, but it has gained a lot of steam as time has gone on, explains Erik. “It’s REALLY good-- peppers and onions and some potatoes fried up crispy with some braised pork belly a couple of eggs and some hollandaise on top of that…this item will stay on the menu!”

Kids are welcome at Grits and Grind and they will appreciate the For the Kids menu which is simply one Pancake or French Toast with a choice of bacon or sausage patty. They will more than likely want to leave with a cool Grits and Grind t-shirt, cap, or coffee cup…all emblazoned with the G & G Grizzly bear! Grits and Grind breakfast is served from 7 a.m.-10:30 a.m. daily and is located next to La Cocina Mexican Bar & Grill in Seacrest Beach (just west of Rosemary Beach), 10343 E. County Hwy. 30-A, 850-231-4021, www.gritsandgrindbreakfast.com. 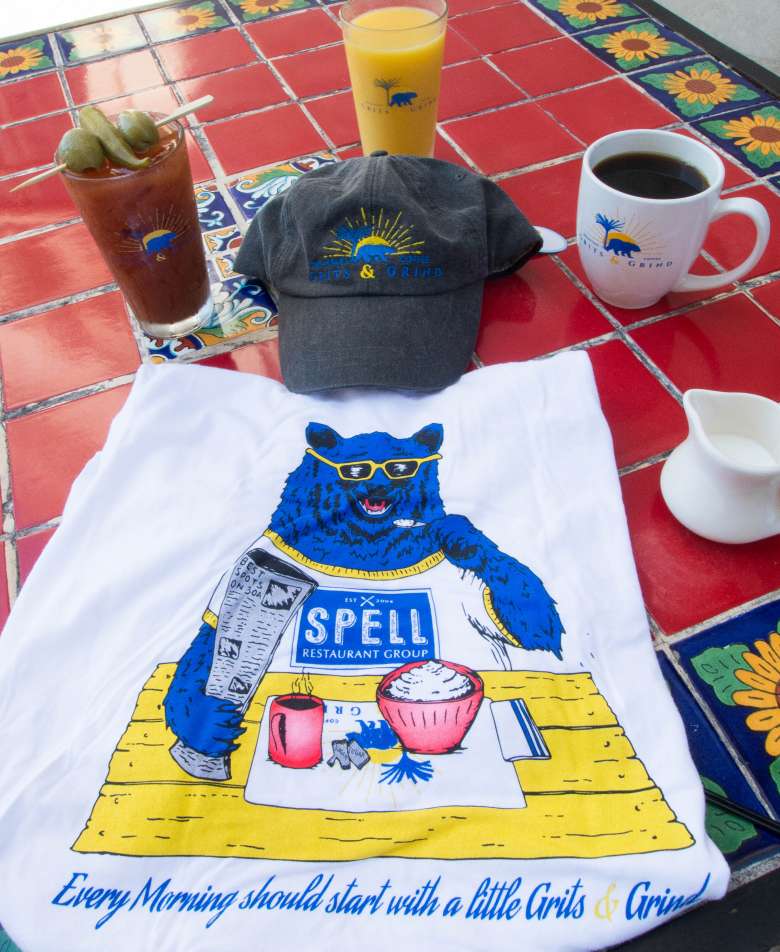 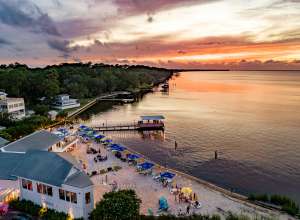 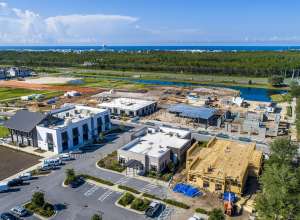 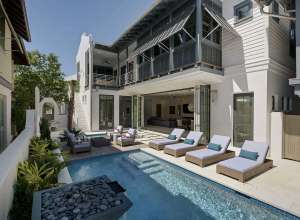 Make Your Dream Home A Reality With TanneyDesign