Got back from almost three weeks at Indian Pass just in time to be stuck on the hill by Tropical Storm Harvey.

Oh well, lots of chores after being gone that will now get done.

My anglers and I had a big time at the pass but the Tarpons were kinda thin there this year. We saw fish every day and put a few in the air for anglers to dance with but never had the "show" with hundreds of fish feeding all around the boat or days of jumping lots of fish.

The Tripletails made up for the Tarpon though, with my anglers catching some of them on every trip I ran and seeing big fish most days. No huge fish but lots of fish in the 10-20 pund class, big by any standard.

The best Tarpon story this year wasn't even on my boat (or any boat for that matter). I had a two-day corporate group trip with six folks so I enlisted the aid of Capt. Shaun Chalker to take half my group.

The first day we caught a couple nice Tripletails, a bunch of sharks and jumped a Tarpon around 100 pounds. Shaun's group had a big time as well and both groups started celebrating while we cleaned fish and warned us they may be late getting started the next day.

Shaun and I have our boats in the water at the ramp the next morning waiting for our anglers, he's against the north dock and I'm on the south. We have everything ready to go and are just shootin' the breeze waiting for our folks to show as the tide starts to turn and we both see a Tarpon feed right at the end of the ramp.

We both grab rods, hop on our respective dock and start pitching swim baits into the current. Shaun has a BIG fish explode right at his feet but the hook pulls on the first jump and he is soaking wet from the Tarpons crash. I

t's obvious the fish are feeding in a current eddy right at the base of the dock he is on and we both keep casting into it and have several more fish swirl our lures with out actually striking. Our anglers all pull up , park at the end of the ramp and start getting their gear out.

I stopped casting and turned to talk to them, trying to get the trip started when all of a sudden there is the biggest splash and a yell from Shaun's side of the ramp. I turned to see a 150 pound Tarpon in the air at his feet, maybe six feet from the end of his rod and he is setting the hook like a madman.

Shauns hands it off and pretty much shoves the angler off the dock into his boat as the fish starts blasting across the pass, more in the air than the water. The two of 'em chase after the fish in the boat leaving the rest of us at the dock to watch and yell encouragement.

After about 45 minutes we all witnessed the angler getting the fish to the boat and Shaun reaching down to grab the bottom lip. The only problem now is everybody else is over 1,000 feet away, still on the dock with nobody to take a picture or help pull a scale for a trophy! My group told the angler that since there was no picture it may not have happened ... probably the most exciting start to a charter trip ever, and a good example of why I never get Tarpon pics on my camera, just too much going on if you are in charge of getting your angler a Silver King! 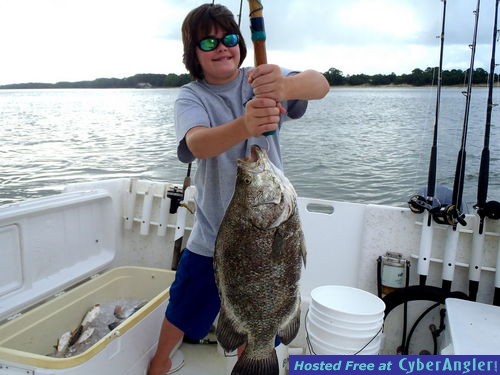 My ace 10 year old angler with a nice 'tail he caught. He got to dance with a Tarpon but the fish was older, weighed more, was probably more experienced and eventually won the battle. 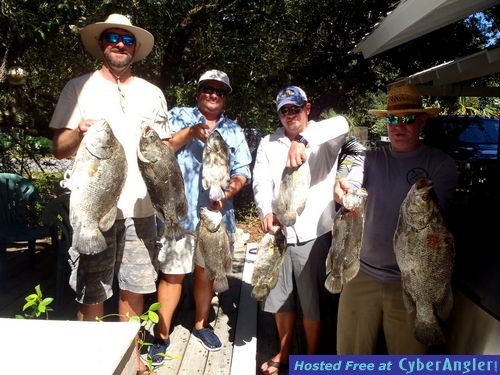 A group of Destin and SoWaL locals that drove over with a limit of Tripletails. 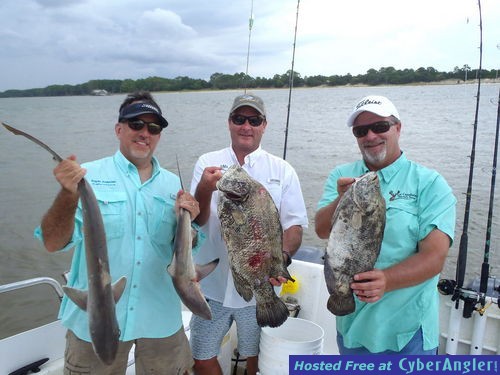 One of my Grayton regulars and buddies on a first trip to the pass and first tripletails. 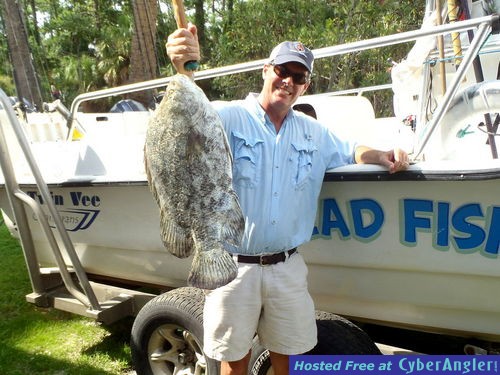 The ace jr anglers dad with a fine 'tail his son "let" him catch. 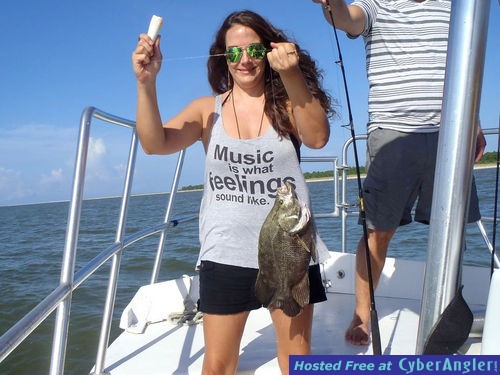 This young lady had never seen a Tripletail before she got this one by herself. Which gave her great ammunition to give her boyfriend grief for missing quite a few after he had told her all about 'em . 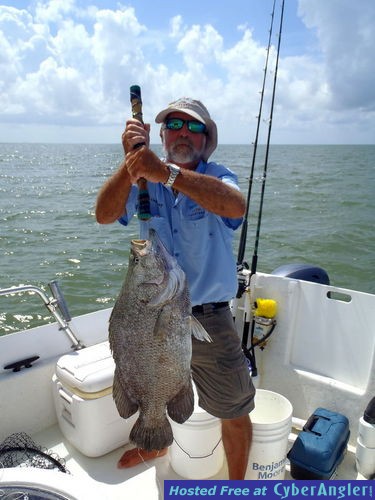 Me on a play trip, proving I can still do it myself as well as yell directions. I don't get to catch many myself but it is still a blast! 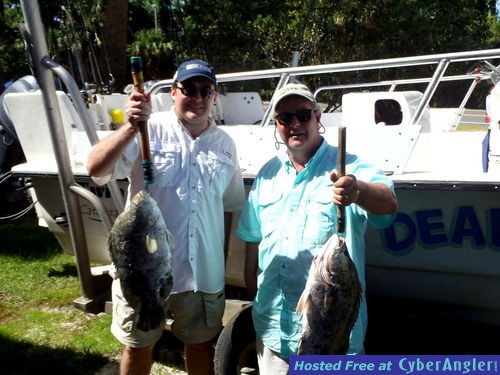 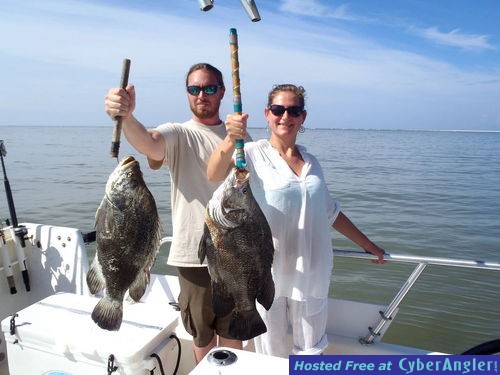 My oldest daughter and son-in-law on the annual birthday tripletail trip with a pair of big ones they caught. 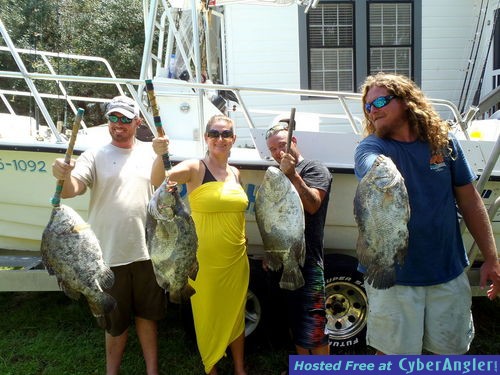 With no scallop season this year for a birthday party we did a little more fishing. Son-in-law, daughter, sons buddy (his birthday too!) and son with part of great days fishing. All good fish with the biggest about 20 pounder.

Hopefully the rain and surf won't last through Labor Day weekend and we can get out by Saturday. This weekend is the last of Red Snapper season for the year and the first four days of an only 10 day Triggerfish season so I am REALLY wanting to run my trips!